Once upon a time, in the place where there is Hervisi, agreed three ways: one conducted in Turkey, the other in Tbilisi, the third to the Black Sea. In addition, there was a trade route linking the northern regions of Georgia with the Middle East. Thus, the fortress was an important strategic object, the possession of which allowed to dominate in these lands.

The history of its construction and existence of no end is well known: the first information about Khertvisi appear only in the X century. According to the chronicles, the chapel, which was located on the territory of the fortress was built in the second half of the tenth century, and the walls, guarding her, much later, approximately in 1354. Perhaps Khertvisi was surrounded by the walls of a much earlier, but the devastating earthquake in 1283, which took place in Samtskhe, has made strengthening in ruins.

There are legends that wall Khertvisi precipitated troops of Alexander the Great, although Alexander the Great in the Caucasus was not. Despite the natural disaster, in the period from X to XI century. Khertvisi reached its peak and by the XII century became the center of Samtskhe-Javakheti, surrounded by beautiful gardens. Unfortunately, 100 years later Khertvisi was destroyed by the Mongols. The following 300 years the fortress owned the Turks, who continued to strengthen and adjust Khertvisi territory. Looking at the wall can be easy to see that one part of it is darker, ie constructed before the other lighter accordingly completed later.

The fortress was refunded Georgia in 1828 as a result of Russian-Turkish wars. Since Khertvisi ceased to be a strategically important object. Today in Khertvisi is the church (it was rebuilt in 2000), land tunnel, which leads to the river and a 20-meter tower

Entrance to the fort is free. 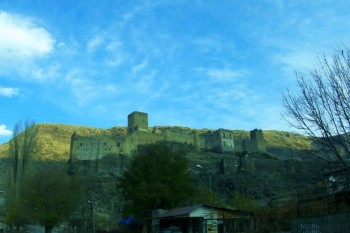 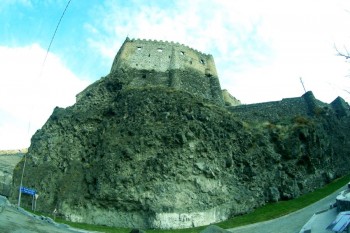 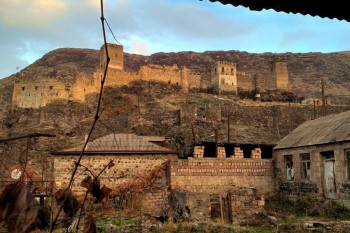